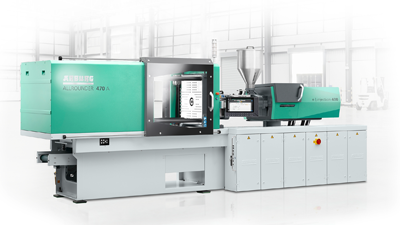 Lossburg, Germany – From November 3-6, Arburg will be in Batalha at Moldplas 2021, Portugal’s largest trade fair. At its stand 3B05 in Hall 10, the company will present innovative injection molding technology, efficient automation and a wide range of digital products and services. A fully automated and digitally networked Allrounder will produce ready-to-use mask boxes. Visitors will also be able to obtain detailed information and advice on the “ArburgXworld” customer portal and the Arburg host computer system (ALS).

Arburg produces and develops its injection molding machines together with their control systems and automation at its company headquarters in Lossburg. As an exhibit for the fair, Arburg Spain has designed a turnkey system around an electric Allrounder 470 A with 1,000 kN clamping force and Gestica control system. Its numerous assistance functions offer a very high degree of convenience and extensive support during set-up and operation. Multilift and six-axis robotic systems can be fully integrated into the system, retaining the Gestica look and feel during operation. This increases the speed, efficiency, and reliability of the cycles.

The exhibit uses a 1+1-cavity family mold from Portuguese partner Gura to produce a PP box and clip for storing face masks in a cycle time of around 30 seconds. An integrated Multilift Select robotic system performs the handling tasks. It first removes the two molded parts and feeds them to a station for plasma pre-treatment. The mask box is then pad-printed with the partner logos, the clip is mounted and then closed in the gripper, and the finished part is placed on a conveyor belt.

All new Allrounders from Arburg have an IIoT gateway as standard and so can be fully networked. At the exhibition stand, a terminal will demonstrate how production data can be recorded and analysed in real time and production efficiency and transparency significantly increased by connecting to an MES such as the Arburg host computer system.