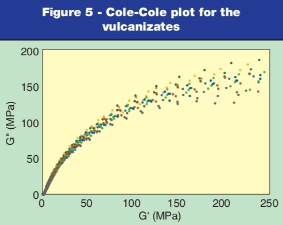 This work was performed on NR (SMR-L grade) and samples of dry ENR obtained from either the Rubber Technology Center, Malaysia, or from Felda Rubber Industries, Malaysia. Nominally, the ENR grades were ENR-15, ENR-25, ENR-35 and ENR-50, where the numbers represent the molar epoxidation levels. The SMR-L, ENR-25 (Ekoprena- 25) and ENR-50 (Ekoprena-50) grades are commercially available as 33.3 kg bales. Testing was performed either on samples from the raw rubber bales, or on vulcanizates compounded according to the formulations. These vulcanizates were cured at 150°C to tmax (the time at which the peak value of torque in the rheometer trace is observed).