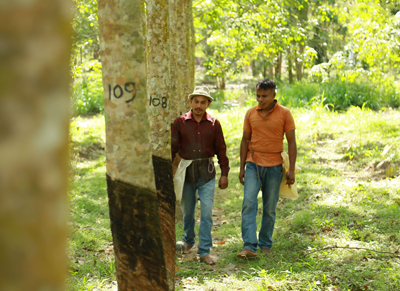 Kerala, India – Natural rubber production in India may fall below target in FY22.

Heavy rains in October-November in Kerala, the chief rubber producer in the country, disrupted the peak tapping season. This had led to a price surge.

In December and January, production did pick up. However, Omicron hit demand this time. The price of the RSS-4 variety, used in tire-making, reflects this. After touching Rs 191 per kg, it has now fallen 15 percent to Rs 161.5 per kg.

“Mostly, those who have not installed rain guards are continuing tapping now in Kerala. Overall, in the county, production in the year is higher because of increasing output in north-eastern states, like Assam and Tripura, and in Karnataka,’’ he said.

“However, cold weather has affected production even in the north-eastern states now. In Kerala, the tapping season is likely to continue until February. Even the current price is not bad for growers,’’ Raghavan said.

The Kerala government had raised the subsidy for small rubber growers from Rs 150 per kg to Rs 170 per kg last year.

Total consumption for the year is likely to remain high. During the initial months of FY22, consumption had picked up, with the recovery in the automobile market. Hence, despite the present fall, Raghavan expects consumption to touch 12 lakh tonnes, compared to 10.96 lakh tonnes last year.

The difference between international and domestic prices have now narrowed down from Rs 30-40 per kg last year to just over Rs 15 per kg now. This will make the landed cost of import higher. The international price of the tire grade variety, RSS-3, is now Rs 146 per kg. Even the import of block rubber in the global market, at Rs 132 per kg, will be unprofitable after paying import duty.

However, as automobile sales have turned sluggish from December 2021, tire makers are soft-pedaling rubber purchases from the local market.

“Demand has slowed down in the farm and two-wheeler segments, which have large consumption. The original equipment (OE) segment in passenger cars is down while diesel price hike and the pandemic have affected the OEs of truck and bus tires, which were just picking up. However, replacement of car, truck and bus tires are going well,’’ said Rajiv Budhraja, director general of Automotive Tire Manufacturers’ Association.

Although the last quarter could be a dampener, overall sales in the tire market is 4-5 percent higher than the previous year. Since imports continue to be disrupted, he said the companies need to plan ahead and should have a plan B. Natural rubber imports had fallen 10 percent in FY21 from a year earlier at 410,478 tonnes.

Valy expects prices to pick up by March as the end of the tapping season could signal a shortage in the market.  “Demand may increase as the market could be free from the grip of the present COVID-19 wave. The higher cost of imports could force tire makers to rely more on the domestic market,’’ he said.