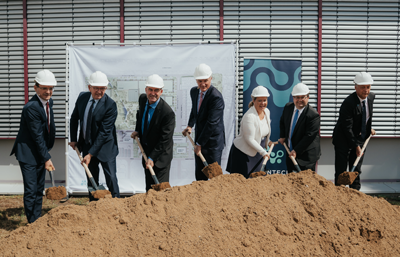 Bamberg Germany – Hubert Aiwanger, Bavarian Minister of State for the Economy, Regional Development and Energy, and Florent Menegaux, President of the Michelin Group, officially laid down the foundation stone of the CleantechInnovation Park, in the presence of Johann Kalb, Landrat for the District of Bamberg, and Thomas Söder, mayor of Hallstadt.

Michelin’s Bamberg tire-manufacturing facility in the city of Hallstadt (Bamberg District), inaugurated almost 50 years ago, will be transformed into a novel facility dedicated to innovation. Totally re-invented, the 8,000m2 site will house specialized companies focusing on artificial intelligence, digitalization and sustainable mobility (hydrogen and electro-mobility).

The Cleantech Innovation Park aims to satisfy the new requirements of the region’s industrial enterprises. The aim is to support the northern Bavarian automobile industry’s transformation, by developing state-of-the-art technologies designed to also reduce global CO2 emissions. The center aims to be a unique network of innovation combining the skills of renowned companies, universities and research institutes (the Fraunhofer Institute, the Universities of Bamberg, Bayreuth and Friedrich-Alexander in Nuremberg-Erlangen), start-ups and specialized small companies.

The governance of the center will be in the hands of Cleantech Innovation Park gmbH, a joint-venture company set up in December 2021, under the direction of Peter Keller, former senior manager in the German subsidiary of the Michelin Group. The center will be financed by Michelin, who will be providing the site and the buildings, the Land of Bavaria, the City of Hallstadt and the District of Bamberg. Around 37 million euros are planned to be invested for a complete overhaul of the 8,000m2 site. The center is due to be operational end 2023. An illustration of Michelin’s savoir-faire in revitalization projects The creation of the Cleantech Innovation Park is the result of an ambitious project to revitalize Michelin’s former tire manufacturing facility in Hallstadt, whose closure was announced in September 2019.

It is a significant part of the global initiatives launched several years ago by the Michelin Group to accompany the changes in its European industrial presence. A similar reconversion program, the Michelin Scotland Innovation Parc, has been successfully completed on the former Michelin site in Dundee, Scotland. A similar operation is also ongoing in La Roche-sur-Yon, France, with the ATINEA project. These economic revitalization programs are complementary with the employee programs put in place by Michelin in cases of facility closures or reorganization of site activities. Such programs are a priority for Michelin – for example, some 84% of the former staff at the Michelin facility in Bamberg have either found new employment or have benefited from pre-retirement programs.

As Florent Menegaux observed “It is a very promising new industrial adventure that kicks off today on our historic Bamberg site. The Michelin teams’ savoir-faire in transforming declining industrial facilities and revitalizing the pools of skilled labor is showcased here. And I remind everyone that nothing would have been possible without the confidence expressed by our partners – the Land of Bavaria, the District of Bamberg and the City of Hallstadt.”