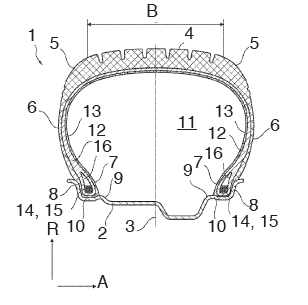 Patent as compiled from the USPTO in December

Rubber composition comprising a specific reinforcing filler
U.S. patent: 11,161,962
Issued: November 2, 2021
Inventors: Joel Barbouteau, Auriane Frisch, Kazuhide Mima and Natsuko Shiozawa
Assigned: Michelin
Key statement: A rubber composition has an improved rolling resistance and is based on at least a diene elastomer comprising mainly at least one isoprene elastomer; a reinforcing filler comprising from 15 to 70 phr of carbon black having a BET specific surface area of less than 70 m2/g and/ or a COAN of less than 90 ml/100 g, and from 5 to 20 phr of silica; a salt of an alkaline-earth, alkali or lanthanide metal; and a crosslinking system; in which composition the carbon black to silica ratio is greater than 1.

Production process of rubber composition
U.S. patent: 11,168,184
Issued: November 9, 2021
Inventors: Koichiro Tani, Ryota Funaki, Rikimaru Kuwabara, Hiroyuki Morita and Takaomi Matsumoto
Assigned: JSR
Key statement: A production process of a rubber composition containing a modified conjugated dienebased polymer, which can provide a rubber composition in which processability is excellent and a filling agent, when contained, has favorable dispersibility therein. The production process of the rubber composition includes: a first step of kneading a modified conjugated diene-based polymer that is obtained by polymerizing a monomer containing a conjugated diene compound and has at least one nitrogencontaining functional group selected from a primary amino group, a secondary amino group, a tertiary amino group and groups in which these amino groups have been converted into an onium group and a basic compound having an acid dissociation constant of 8.0 or more; and a second step of kneading the kneaded product obtained in the first step and a crosslinking agent.

Rubber composition and tire
U.S. patent: 11,168,197
Issued: November 9, 2021
Inventors: Satoshi Hamatani and Hidenobu Akahane
Assigned: Bridgestone
Key statement: A rubber composition that is capable of providing vulcanized rubber excellent in the abrasion resistance without the deterioration of the crack resistance and the low heat generation property is provided. The rubber composition contains: (A) a rubber component; (B) carbon black having a CTAB specific surface area of 110 to 160 m2/g, a half value width ΔD50 of a peak including a Stokes equivalent diameter Dst obtained by a centrifugal sedimentation method of 60 nm or less, and ΔD50/Dst of 0.95 or less; and (C) silica having a CTAB specific surface area of 200 m2/g or more, has a total amount of a content (b) of the carbon black (B) and a content (c) of the silica (C) of 30 to 80 parts by mass per 100 parts by mass of the rubber component (A), and has (b)/(c) of (60 to 85)/(40 to 15).