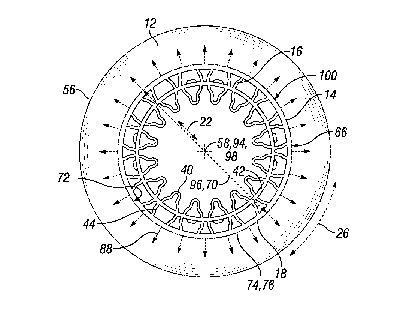 Patents as compiled for October by Rubber World Magazine

Winter tire stud
U.S. patent: 11,084,331
Issued: August 10, 2021
Inventors: Frederic Michel-Jean Pons, Arnaud Caron and Damian Wilhelm Georges
Assigned: Goodyear Tire & Rubber
Key statement: A stud is inserted into a tread portion of a tire. The first stud includes a tip end protruding from the tread portion for contacting a surface, the tip end comprising a radially outer portion with a first surface, a second surface, a third surface, a fourth surface, a fifth surface, a sixth surface and a seventh surface, the first surface defining an irregular quadrilateral and extending radially inward from the fourth surface toward a planar side of the tip end; and a base including a flanged bottom portion provided on an end opposite the tip end and extending radially outward, a stump portion provided between the bottom portion and the tip end, and a shank portion interconnecting the stump portion and the bottom portion, the base being embedded and secured in the tread portion of the tire in which the first stud is installed, the bottom portion having a teardrop shape comprising three planar sides and one semicylindrical side.

Tire with sensor attachment reservoir and method of attaching sensor
U.S. patent: 11,117,429
Issued: September 14, 2021
Inventors: Julien Plattier, Jean-Claude Patrice Philippe Griffoin, Jason Mark Middelberg, Kevin Erik M. Pierret, Etienne Marie Willy Legrand, Olivier Jean-Pierre Richard, Mike Klein, Benoit Julien A. Debout,
Andreas Frantzen, Laurent Roger Andre Dubos and Lothar Braun
Assigned: Goodyear Tire & Rubber
Key statement: A tire with a sensor attachment reservoir is provided. The tire includes a pair of bead areas, a sidewall extending from each respective bead area to a tread, a carcass extending toroidally between each of the bead areas and an innerliner disposed inwardly of the carcass. A compound ring is secured to the innerliner, and the compound ring defines a reservoir upon being secured to the innerliner. A sensor adhesive is disposed in the reservoir and a sensor is secured to the tire innerliner by the sensor adhesive. A corresponding method of attaching a sensor to a tire is also provided