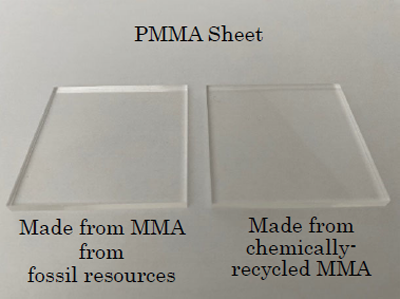 Tokyo, Japan – Sumitomo Chemical has decided to construct a pilot facility for chemical recycling of acrylic resin (PMMA, poly-methyl-methacrylate) at its Ehime Works in Niihama City, Ehime Prefecture, Japan. The new facility is scheduled to begin pilot tests in the fall of 2022 and to start providing samples in 2023. In parallel with this project, the company will work to develop a recycling system for PMMA, from collection of used acrylic resin to recycling and reprocessing into products, aiming for early commercialization of chemically recycled PMMA.

Acrylic resins, which possess the highest level of transparency among synthetic resins as well as superior weatherability and processability, are used in a wide range of applications, such as automotive tail lamp covers, electrical appliances, aquariums, outdoor signboards, liquid crystal displays, building materials and protective partition panels to reduce the spread of droplets. Global demand for acrylic resins exceeded 1.3 million tons in 2020, and is expected to continue to grow steadily in the future.

In response to ever-growing environmental awareness, Sumitomo Chemical is working on the development of various chemical recycling technologies in-house as well as in collaboration with other companies and academic institutions. For acrylic resin chemical recycling, the company has been pursuing development in collaboration with The Japan Steel Works, Ltd. (“JSW,” headquartered in Shinagawa-ku, Tokyo), combining JSW’s continuous plastic decomposition technology using twin-screw extruders with Sumitomo Chemical’s expertise on MMA (methyl methacrylate) monomers and acrylic resins that it has cultivated over the years. With its own basic technology to pyrolyze acrylic resin and regenerate it as MMA monomer, which is used as a raw material, now successfully established, Sumitomo Chemical has decided to construct a pilot facility. The acrylic resin produced by re-polymerizing MMA monomer obtained by this technology is expected to reduce greenhouse gas emissions over the entire product life cycle by more than 60 percent compared to virgin materials produced from fossil resources, while maintaining the same level of basic properties, such as transparency and strength.

The used acrylic resin to be used as a raw material in this pilot test will be sourced from Nippura Co., Ltd. (Miki-cho, Kita-gun, Kagawa Prefecture, Japan), which boasts the world’s top share in the production of large acrylic panels for aquariums and has been a partner of Sumitomo Chemical for about 50 years. In order to commercialize chemically-recycled PMMA, Sumitomo Chemical will also begin to study the development of a stable raw material procurement system, including the collection of used acrylic resin from scrapped automobiles, electrical appliances, and protective partition panels. The recycled MMA monomer and the acrylic resin made from it are expected to be used in fields and products in which the added value of recycled materials is recognized, such as automobiles, where environmental regulations are being tightened, and road sound barriers for public highways.

Sumitomo Chemical positions its contribution to reducing environmental impact, including efforts towards a circular economy for plastic resources, as one of the material issues to be addressed as management priorities. The Sumitomo Chemical Group will continue to work as one to create both economic value and social value in an integrated manner, achieving sustained growth for the group and contributing to building a sustainable society.