Philip Nelles has officially taken up his responsibilities as the new CEO of Continental’s ContiTech business area. In his new role, Nelles stands committed to driving the unit’s ongoing transformation as a provider of innovative solutions for a highly industrial clientele. “We consider it our corporate responsibility to develop cutting-edge materials and innovative technologies together with and for our diversified customers. Sustainability is equally an enormous chance and a key driver for innovations for new and completely changed future business models. This enables us to not only stay on top of the evolving needs of ever-changing markets, but also to do our part in fulfilling the societal responsibilities to which the entire company group stands committed. And the sum total of all of this is that we are steadily paving the way to future viability,” remarked ContiTech executive board member Phillip Nelles, adding: “Together with our global team, it’s a great pleasure for me to be pursuing these objectives.”

END_OF_DOCUMENT_TOKEN_TO_BE_REPLACED

Continental has launched a new telehandler and skid steer loader tire. The CompactMaster AG tire is the first to be designed with a new Turtle Shield tread layer and twisted steel belt. “This is a reinforced tire with a hard shell and a more flexible steel wire construction to help prevent cuts and damage, while offering greater stability for materials handling work,” explained Benjamin Hübner, product line manager, agricultural tires, at Continental Commercial Specialty Tires.

END_OF_DOCUMENT_TOKEN_TO_BE_REPLACED

Continental celebrates its 150th birthday in 2021. In the field, in the harbor, on the airfield: Specialty tires from Continental Commercial Specialty Tires provide traction and movement in a wide variety of applications. Their long history is also a significant chapter in international industrial history.

END_OF_DOCUMENT_TOKEN_TO_BE_REPLACED 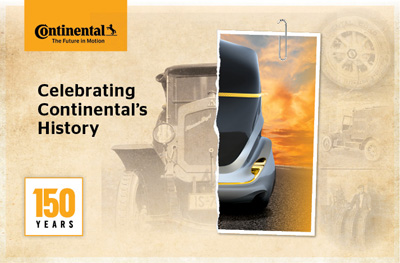 Throughout this year, Continental will celebrate the company’s esteemed history with stories on how it became a driving force of technological progress. Before cars were even invented, the company began by manufacturing horse “hoof buffers” along with solid tires for carriages and bicycles. In 1904, Continental was the first company in the world to develop automobile tires with a patterned tread, and four years later invented the detachable rim. On the year of its 50th anniversary, in 1921, Continental produced its first commercial truck tires, and became the first German company to produce tires reinforced with pliable cords rather than linen fabric. Six years later, it launched the very first pneumatic tractor tire in Europe