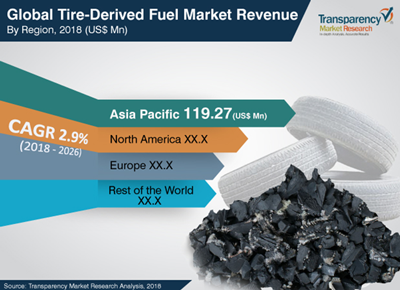 The tire derived fuel or TDF is a product of various kinds of scrap tire material. Such scrap usually includes uniforms pieces of junk tires which meet the expectation of end-industries. These can be in the form of pulp, cement kilns, paper mills, and electric utilities. These tires help end-use industries lower costs, improve boiler efficiency, and reduce air emissions. According to recent estimates by the Environmental Protection Agency, or the EPA, the TDF raises equivalent amount of output to oil. It also produces nearly 20% to 50% more energy as compared coal. Moreover, it can double the output of energy produced from wood.

TDF produces considerably low emissions, when produced at a well-controlled facility. Additionally, the fuel reduces dependence on fuels and is reasonably priced for a wide-scale commercial application. Moreover, in 2003, EU regulators mandated companies to find new ways to reduce landfill reserves of scrap tires. The limited capacity of landfills and the environmental pollution caused due to scrap tires are expected to keep the regulators vigilant in the near future. Furthermore, TDF has the same heating value to that of coal, usually around 13,000 to 15,000 BTUs or British Thermal Units. Long fuel residence time and high temperatures are expected to drive considerably higher demand in the tire derived fuel market in the near future.

Regions like Asia Pacific are witnessing a major growth in the automobile industry. Growing population, introduction of various automobiles, and rise in disposable income are expected to drive major growth for the industry in the near future. However, the region is also witnesses low-recovery rates of scrap tires, limiting its application. While government regulations are becoming increasingly stringent, these are still not on par with their counterparts in Europe and North America. However, growing awareness about the scrap tire waste in landfills, and strong demand in the auto industry across developed regions due to trends like automated car are expected to result in significant opportunities in the near future. The tire derived fuel market is expected to witness a growing opportunity, thanks to advanced manufacturing techniques already available in countries like Japan.