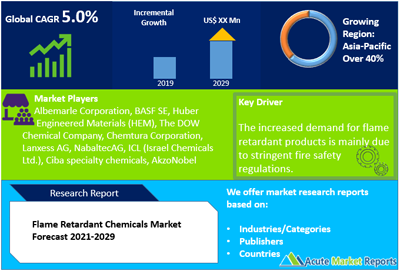 To reduce the flammability of consumer goods such as furniture, electronic devices and clothing, flame retardant chemicals are added. The presence of an ignition source activates flame retardants, which are designed to prevent or slow the spread of ignition through a variety of physical and chemical means. They can be introduced as a copolymer during the polymerization process, afterwards added to the polymer during the molding or extrusion process, or applied as a topical finish (especially for textiles). Inert gases or compounds with endothermic and thermal resistance qualities are used to make flame retardants. Furthermore, the choice of a specific chemical is dependent on the material to which it is to be added, because the chemical’s constituent elements react differently with fire. In 2019, more than 2 million tons of flame retardants were processed globally.

On the basis of end-user, construction and building dominated the market, owing to increased construction activity around the world. The entire value of new construction put in place in the United States was over $1,365 billion in 2019, and is expected to illustrate a growth rate of roughly 4.5 percent, further increasing the demand for flame retardant chemicals. Governments all over the world are establishing higher safety standards for smoke and flammability in various products. Due to increasing development activity in developing countries, the construction industry will probably emerge as one of the main consumers of flame retardant chemicals. The global flame retardant chemicals market is also being propelled ahead by increased demand from the transportation and auto industries. In the approaching years, the demand from the home furnishing business is also predicted to increase. Other application sectors, such as electronics, and wire and cable, are expected to grow steadily in the near future. The flame retardants act in two respects: They either prevent a fire from beginning, or dramatically slow it down after it has started. They are used in plastics and other materials, and they have no effect on the raw material’s qualities.

In 2020, COVID-19 adversely affected the market. Because of the pandemic scenario during the lockdown imposed by government, construction and automotive works were temporarily stopped, thereby reducing the demand for flame retardants. The construction industry is, however, rapidly recovering and is expected to increase over the next several years, boosting requirements for the flammable chemicals market. In addition to COVID-19, rising environmental and health concerns, high pricing of flame retardant products and rising concerns about harmful content hinder the market’s expansion.

The flame retardant chemicals market was dominated by Asia-Pacific for the year 2020. China alone accounts for nearly a quarter of worldwide flame retardants demand. China’s high demand is fueled by the country’s growing chemical and automobile industries. India is also anticipated to grow its market share in the global market as a result of increased foreign investment. In North America, on the other hand, the market will grow significantly in the coming years because fire safety in all end products is mandatorily regulated. In addition, due to the growing use of these products by the automotive industry, the Europe market will show significant growth in the next few years.