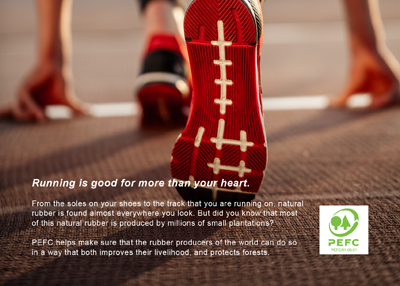 Geneva, Switzerland – The Program for the Endorsement of Forest Certification (PEFC) announced that certification of a $300 billion supply chain is essential to achieving the UN Sustainable Development Goals before 2030.

In recognition of the essential role that natural rubber plays in meeting the UN Sustainable Development Goals, the forest certification giant PEFC is launching a campaign to support local forest owners in Southeast Asia in their push for sustainability with a global event on July 7.

The inclusive campaign “PEFC Is Here” celebrates the role that millions of smallholders play in the creation of more than 40,000 kinds of essential goods such as tires, shoes and the billions of syringes vital to delivering COVID-19 vaccines worldwide.

Since 1999, PEFC has helped smallholders and the manufacturers they work with to ensure that the value they create does not come at a cost to the climate, biodiversity, watersheds, forests and ultimately their own livelihoods. “PEFC Is Here” continues this commitment and will give everyone from consumers to manufacturers the tools and information they need to help in that effort.

For the past decade, PEFC has played a leading role supporting the entire natural rubber value chain. This includes rubber wood, of which 63 million metric tons is produced every year, making it the world’s most widely traded tropical hardwood. With this campaign, and the July 7 event, PEFC continues its leadership on pushing for more sustainable natural rubber production.

In Vietnam and Thailand, PEFC will travel to rubber plantations to hear first hand the stories of smallholders and the challenges they face, and throughout the coming months, the campaign will feature a series of videos elevating their voices.

At the same time, PEFC is providing a sustainability tool kit to manufacturers, particularly in the tire industry, to help them spur certification downstream through the supply chain.

In preparation for the campaign launch, PEFC International CEO Ben Gunneberg noted: “Natural rubber touches our lives in so many ways, but it is often overlooked by those of us who use it. Our Supporting Sustainable Rubber campaign is all about shining a light on the product, and making the connection between sustainable natural rubber production, forest health and smallholder livelihoods.”

“PEFC Is Here” is open to participation from everyone who cares about the health of forests around the world. During the July 7 launch, a panel of sustainability experts will highlight ways to join in the effort, whether from individuals, governments, CEOs or farmers. The webinar takes place July 7 at 15:00-16:00 ICT (10:00-11:00 CEST) and is free to attend. Register now.