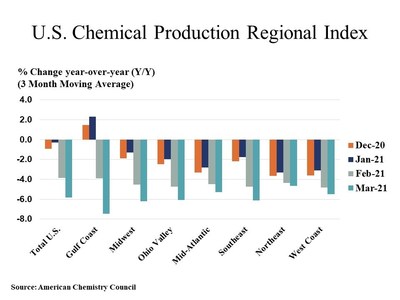 Washington DC – The U.S. Chemical Production Regional Index (U.S. CPRI) fell 2.8% in March following a 3.9% decline in February and a 0.6% increase in January, according to the American Chemistry Council (ACC). Chemical output fell in all regions as the impact of the February winter storm continued to disrupt chemical production in the Gulf Coast and parts of the country that rely on raw materials from the region. The U.S. CPRI is measured as a three-month moving average (3MMA) basis.

As measured on a 3MMA basis, chemical production was mixed in March, with improvement occurring in the production of chlor-alkali, adhesives, coatings, other specialties, manufactured fibers, synthetic rubber, and fertilizers. These gains were offset by continued weakness in organic chemicals, plastic resins industrial gases, synthetic dyes and pigments, other inorganic chemicals, crop protection chemicals and consumer products.

Compared with March 2020, U.S. chemical production remained off by 5.8% on a year-over-year basis, the twenty-second consecutive month of Y/Y declines, and a deterioration reflecting the lingering impact of the winter storms. Chemical production was lower than a year ago in all regions.