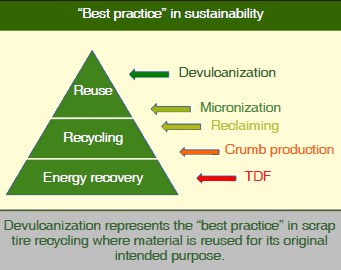 The disposal of scrap rubber has been a concern since its vulcanization with sulfur and heat was accidentally discovered by Charles Goodyear in 1839. In addition to the scrap generated in production, there is the question of discarded rubber goods that have outlived their usefulness for their original function. Traditionally, this waste had ended up in landfills, contributing to the growing problem of overcrowding. Scrap tires are a well-publicized category of scrap rubber, as each year automobiles produce 246 million waste tires in the United States alone. The good news is that tire recycling, the process of converting end-of-life tires into materials that can be utilized in new products, has become a major success story in the United States. The stockpile was estimated at over 1 billion scrap tires in 1990, and as of 2017, it was estimated to have shrunk to just 60 million.

There are several different processes that are used to reduce the number of waste tires, feeding into several different markets. These processes can be fit to the waste hierarchy that is used for evaluating methods for protecting the environment in terms of their sustainability and desirability. At the bottom of the pyramid, as the least favorable option, is tire derived fuel (TDF), which accounted for 43% of the scrap tire consumption in 2018. TDF is not truly recycling, but it is considered a beneficial reuse, as energy is recovered from the scrap. Rubber crumb, which accounted for 25% of the scrap tire usage in 2017, is the next level, and predominantly refers to the ground material which is used in asphalt rubber. Other recycling options like tire-derived aggregate (TDA), and pyrolysis into oil and carbon black fall into the middle of the pyramid, but these options provide materials of inferior quality to the original.