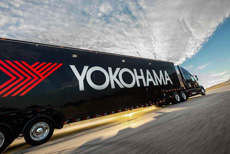 Tokyo, Japan — The Yokohama Rubber Co., Ltd., announced its business and financial results for the first quarter (January to March) of fiscal 2022. Profit attributable to owners of parent declined 63.5% from the same period of the previous year, to 10.2 billion yen; on a 62.7% decline in operating profit, to 13.5 billion yen; a 2.5% decline in business profit, to 13.7 billion yen; and a 28.4% increase in sales revenue, to 185.6 billion yen.

The figure for sales revenue was the highest ever at Yokohama Rubber in the January-to-March quarter. It reflected success in securing price increases for tires in North America and in other markets and the weakening of the yen against the dollar and the euro. Business profit declined despite the sales growth on account of the adverse effects of upturns in raw material costs and logistics expenses, the disruptions in global supply chains, and the challenges presented by the Covid-19 pandemic.

In replacement tires, sales revenue rose overall. Yokohama Rubber promoted high-value-added tire products in Japan, introducing new products under the ADVAN series and other brands. Sales revenue benefited in Japan from heavy snowfalls, which stimulated demand for studless winter tires, and from a surge in purchases in advance of price increases. Sales revenue in replacement tires rose in North America and in India and other Asian markets outside Japan as Yokohama Rubber responded effectively to robust demand.

In Yokohama Rubber’s MB (Multiple Business) segment, sales revenue increased over the same period of the previous year, but business profit declined on account of such factors as rising raw material costs and a tight labor market in the United States. Sales revenue in hose & couplings rose in Japan and overseas, led by strong sales of hoses for construction equipment. Yokohama Rubber also posted growth in sales revenue in industrial materials. That growth occurred despite weakening demand for marine products. It reflected successful measures to bolster sales of conveyor belts in Japan and a recovery in demand in the commercial aircraft sector for replacement fixtures and components. Yokohama Rubber formerly accounted for its business in aircraft fixtures and components as a separate product category, but it transferred that business to industrial materials as of March 30, 2022.