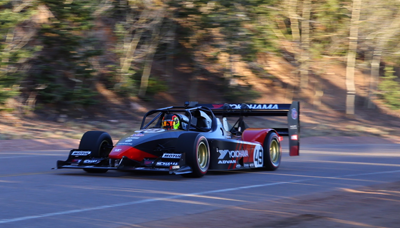 Santa Ana, CA – Yokohama Tire announced major plans to celebrate the 100th running of the legendary Broadmoor Pikes Peak International Hill Climb, including sponsoring and securing a position as the exclusive tire supplier of The Porsche Pikes Peak Trophy by Yokohama for the fifth straight year – all the Porsche Cayman GT4 Clubsport vehicles will be competing on ADVAN A052® tires.

All told, Yokohama will field 20 drivers in multiple classes during the 12.42.-mile iconic “Race to the Clouds,” which is set for June 26 in Colorado Springs, Colorado. Yokohama will also unveil and race a new, environmentally sustainable derivative of the A052 tire.

“Yokohama has a long, highly successful history at Pikes Peak,” said Fardad Niknam, Yokohama Tire’s senior director of product planning and product marketing, “including overall championships and many records and wins in the electric vehicle class. This year, we’ll have over 20 percent of the Pikes Peak field, which we believe will be the highest number of drivers running on one tire brand!”

– Robin Shute: The 2021 overall champion and unlimited class winner will campaign his 2018 Wolf GB08 TSC-LT on special ADVAN A005™ tires with the same specs as those supplied for use in the Japanese Super Formula Championship, Asia’s ultimate formula car race – a first for a top team in the unlimited division at Pikes Peak.

– Porsche Pikes Peak Trophy by Yokohama field: Returning to the mountain are Charles “Chaz” Wirken, Cam Ingram and George Hess III, as well as newcomers Gilles Nadeau, automotive journalist Johnny Lieberman and Loni Unser, whose family is no stranger to the mountain – her great grandfather Jerry Sr. raced for the first time at Pikes Peak in 1931 and her great uncle Louis won it in 1934!

“We’ll be highlighting the performance of our ADVAN tires on the mountain,” said Niknam. “All the EV cars in action will be shooting for wins on ADVAN UHP or race tires, which have proven themselves time and again. We’re excited to take on the mountain again on ADVANs.”

Yokohama will also have a major presence at Fan Fest, Friday, June 24 in downtown Colorado Springs, where 40,000-plus fans are expected to attend. At the Yokohama display, limited edition 100th anniversary Pikes Peak posters will be given away, there will be meet-and-greet with drivers, cool cars on display, hourly giveaways and more.