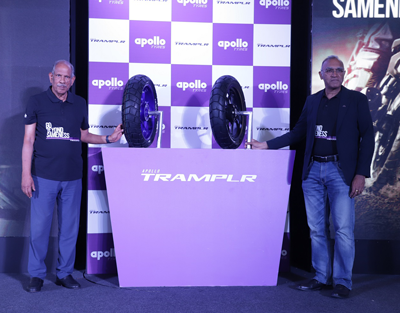 Gurgaon, India – Apollo Tyres introduced the Tramplr range of Enduro Off-road and Enduro Street tires for Indian premium motorcycles market (150 – 500 cc). Tramplr range will cater to various motorcycle segments like Sport Touring, Adventure Touring, Cruisers and Street Sports, which constitutes around 20% of the overall motorcycle market in India.
Apollo Tramplr comes in two patterns, Apollo Tramplr XR, which is a 70:30 Enduro Off-road tire for Adventure Touring, and Apollo Tramplr ST, which is a 80:20 Enduro Street tire for Dual Sports capabilities. These tires have been designed and developed at Apollo Tyres’ Global R&D Centre, Asia in Chennai and are being produced at the company’s state-of-the-art facility in Vadodara, Gujarat.
Speaking at the launch event, Satish Sharma, President, Asia Pacific, Middle East and Africa (APMEA), Apollo Tyres Ltd, said “The changing consumption pattern of Indian consumers, along with the increase in enthusiastic segment of riders, who seek adventure, has led us to giving them new shoes to do more with their current set of motorcycles. From being focused on steel radial technology products for great sports performance, we are now pushing the envelope to go for dual sports and adventure touring segment.”
Apollo Tyres has created a new segment, basis the customers’ feedback, which allows bikers to go for adventure touring with Apollo Tramplr XR, in addition to their regular rides on their current machines. Tramplr XR will cater to the likes of Royal Enfield Classics, Yamaha FZ series, Suzuki Gixxer & Intruder, KTM Series, Bajaj Dominar and BMWG310R.
Apollo Tramplr XR is a feature loaded tire, which pushes the riders to go beyond the sameness. Inspired by exploration, the tire sidewall has some of the greatest adventure locations imprinted on it for the explorers to embark on an epic journey. The locations mentioned on the sidewall imbibe the idea of going to all these places and checking off the bucket list with Tramplr XR. The sidewall styling is also based on the true adventure touring nature of this tire.
With a unique tread pattern and great on-road handling, Tramplr XR is excellent for adventure touring as well as, for on-road comfort. Big-sized tread blocks and steel radial technology improve structural resistance, giving it perfect stability at high speed, which makes Tramplr XR an exceptional tire for all-terrain riding. The stone ejectors, open cross grooves and specialized compound enhance its off-roading capability taking your adventure to the next level.
The Apollo Tramplr ST is designed to let the rider conquer every corner of the city. Inspired by the evergreen tradition and street culture of biking, the sidewall is imprinted with graffiti art which focuses on riders’ camaraderie. Being the art form of expressions, graffiti nudges the riders to express their thirst to reign the streets with their bike and other riders. The Apollo Tramplr ST will cater to the likes of Bajaj Pulsar, TVS Apache series, Yamaha Fazer and MT15.
Apollo Tramplr ST has exclusively designed tread pattern and unique sipes for better wet grip for city riding, as well as, for off-roading in all-weather conditions. Big central blocks and wide footprint area give Tramplr ST superior grip and low rolling noise that keeps the bike stable at high-speed and keep the fun going while riding.
Despite being a late entrant in the two-wheeler segment in India, Apollo Tyres commands a 10% overall market share in this segment. However, the company has focused its strategy on premium motorcycling space, and within a short time, has garnered 20%+ market share in the premium segment of two wheelers.