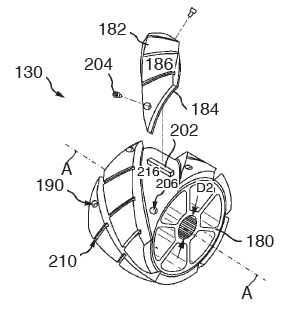 Sulfur-crosslinkable rubber mixture, vulcanizate of the rubber mixture and vehicle tire
U.S. patent: 11,325,988
Issued: May 10, 2022
Inventors: Catarina Sa, Gesa Tarantola, Viktoria Pavon Sierra and Armand Gabriel Becheanu-Boeke
Assigned: Continental Reifen
Key statement: A sulfur-crosslinkable rubber mixture comprising at least the following constituents: at least one diene rubber and at least one liquid, linear modified diene polymer A, modified with a functional group of formula I) at only one chain end, the number of functional groups per molecule being on average from 0.8 to 1
(R1R2R3)Si–X–NH–C(==O)–O–, I) where R1, R2 and R3 independently of one another are selected from methoxy groups, ethoxy groups, phenoxy groups, methyl groups, ethyl groups and phenyl groups, with in each case at least one of the groups R1, R2 and R3 being a methoxy group, an ethoxy group or a phenoxy group and where X is a divalent alkyl group having 1 to 6 carbon atoms.

Elastomeric compositions and their applications
U.S. patent: 11,332,581
Issued: May 17, 2022
Inventors: Frederic Gubbels and Sandrine Teixeira de Carvalho
Assigned: Dow Silicones
Key statement: A condensation curable gel composition is disclosed. The composition comprises: (i) at least one condensation curable silyl terminated polymer having at least one hydrolyzable and/or hydroxyl functional group(s) per molecule; (ii) a cross-linker selected from the group of a silicone, an organic polymer, a monosilane or a disilane molecule which contains at least two hydrolyzable groups per molecule; and (iii) a condensation catalyst selected from the group of titanates, zirconates or tin (II). The molar ratio of hydroxyl and/or hydrolyzable group(s) in polymer (i) to hydrolyzable groups from component (ii) is between 0.5:1 and 1:1 using a monosilane crosslinker or 0.75:1 to 3:1 using disilanes. The titanates and zirconates comprise M-OR functions where M is titanium or zirconium and R is an aliphatic hydrocarbon group. The molar ratio of M-OR or tin (II) functions to the hydroxyl and/or hydrolyzable groups in polymer (i) is comprised between 0.01:1 and 0.5:1.