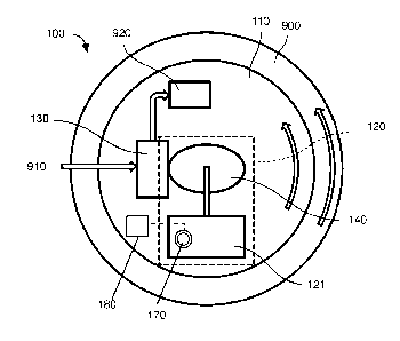 System for tire inflation
U.S. patent: 11,453,258
Issued: September 27, 2022
Inventor: Brandon Richardson
Assigned: Aperia Technologies
Key statement: A system for tire inflation including a drive mechanism defining a rotational axis, including an eccentric mass that offsets a center of mass of the drive mechanism from the rotational axis along a radial vector; a pump arranged radially distal the rotational axis of the drive mechanism, including a chamber defining a chamber lumen and a reciprocating element arranged at least partially within the chamber lumen and translatable along a pump axis; a drive coupler coupled between the drive mechanism at a first position and the reciprocating element at a second position fixed to the reciprocating element; a torque regulation mechanism; and a controller, communicatively coupled to the torque regulation mechanism; wherein the system is operable between at least a first mode and a second mode by the torque regulation mechanism in cooperation with the controller.