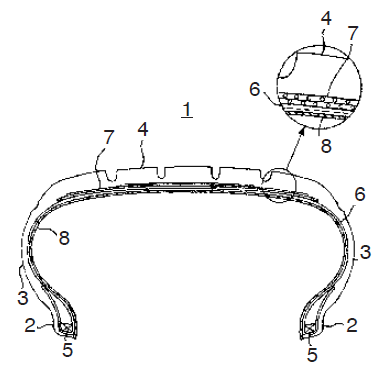 Tire for heavy goods vehicle
U.S. patent: 11,400,756
Issued: August 2, 2022
Inventors: Olivier Goncalves, Muhamed Jesbeer Kallungal Abdul Jaleel and Perrine Vallat
Assigned: Michelin
Key statement: The tire has a radial carcass reinforcement intended to equip vehicles carrying heavy loads and running at sustained speed. The tire comprises a crown reinforcement, itself capped radially with a tread joined to two beads via two sidewalls. The tread comprises at least two radially superposed layers of polymeric compound, a radially outer first layer that comes into contact with the ground and a radially inner second layer. The second layer has a composition based on at least a diene elastomer, a reinforcing filler comprising predominantly a filler covered at least partially by silica, an agent for coupling the filler with the elastomer and a crosslinking system. The dispersion of the filler in the elastomeric matrix has a Z value greater than or equal to 70.

Tire rubber composition
U.S. patent: 11,413,905
Issued: August 16, 2022
Inventors: Hirokazu Kageyama, Kazushi Kimura, Genichiro Shimada and Satoshi Mihara
Assigned: Yokohama Rubber
Key statement: The present technology provides a tire rubber composition formed by blending a microparticle composite, which is formed from a solid component of a mixture containing an emulsion of an organic microparticle and a rubber latex, in a sulfur vulcanizable rubber; the emulsion of the organic microparticle being an emulsion containing a microparticle obtained by polymerizing and/or crosslinking at least one selected from the group consisting of polymerizable monomers and oligomers, prepolymers and polymers having a reactive functional group and having a molecular weight from 500 to 50,000 simultaneously or stepwise in water; and an average particle size of the microparticle being from 0.001 to 100 μm.

Method of manufacturing rubber composition
U.S. patent: 11,427,700
Issued: August 30, 2022
Inventors: Jae Yun Kim, Yeong Min Jung and Soojung Park
Assigned: Korea Kumho Petrochemical
Key statement: A method of manufacturing a rubber composition is provided. The method includes: (a) allowing a mixture including a conjugated diene-based monomer to react in the presence of a first catalyst; (b) introducing a carboxylic acid-based compound into the product of the step (a) to deactivate the first catalyst; and (c) introducing a second catalyst and a conjugated diene-based monomer into the product of the step (b) and allowing the second catalyst and the conjugated diene-based monomer to react with the product of the step (b).