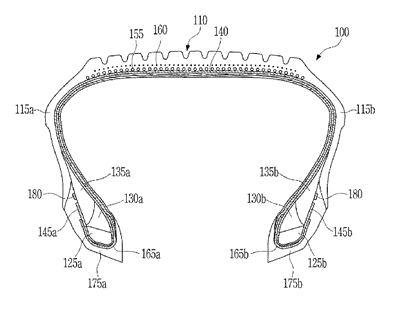 Patents as compile for the September issue of Rubber World Magazine

Tire vulcanizing method
U.S. patent: 11,077,634
Issued: August 3, 2021
Inventors: Hajime Satou and Noboru Takita
Assigned: Yokohama Rubber
Key statement: Provided is a tire vulcanizing method enabling an optimum vulcanization operation for each tire by measuring the temperatures of the inner surface and the outer surface of a tire until the demolding timing without damaging the tire and by determining the vulcanized state of the tire accurately based on the measured temperature data to efficiently produce uniformly vulcanized tires especially under conditions where the temperature of a mold fluctuates. During vulcanization of a tire G, the temperatures of the inner surface and the outer surface at a plurality of principal portions representing the tire G are measured, and the demolding timing is determined according to the equivalent degree of vulcanization indicating the degree of progress in crosslinking reaction calculated based on the temperature data measured.

Rubber composition for studless tire and studless tire
U.S. patent: 11,072,695
Issued: July 27, 2021
Inventor: Keisuke Iwakuni
Assigned: Toyo Tire
Key statement: A rubber composition for a studless tire according to an embodiment includes a rubber component containing a natural rubber and a polybutadiene rubber; oil-absorbent polymer particles having a glass transition temperature of -70 to -20°C, formed from a polymer whose molecular weight distribution is less than 3.0, and having an oil absorption of 100 to 1,500 ml/100 g; and an oil. The content of the oil-absorbent polymer particles is 0.5 to 25 parts by mass per 100 parts by mass of the rubber component. As a result, on-ice performance and rolling resistance performance can be
improved.

Tire protection system
U.S. patent: 11,066,109
Issued: July 20, 2021
Inventor: Anthony David
Key statement: A tire protection system includes a magnet assembly disposed in front of or behind a tire of a vehicle. The magnet assembly attracts and collects metallic debris on the roadway in front of the tire as the vehicle travels along the roadway, thereby preventing the debris from damaging the tire. The magnet assembly may be integrated into a wire-type housing and/or frame that is coupled to a mud flap, lower windscreen and/or bodyside molding located near the undercarriage of the vehicle.

Tire sensor mounting assembly, vehicle wheel balancer, combination tire sensor mounting assembly and wheel balancer, method for mounting a tire sensor to a vehicle part, and method for balancing a vehicle wheel
U.S. patent: 11,072,213
Issued: July 27, 2021
Inventors: Alan C. Lesesky and Samuel Duke Drinkard
Assigned: Itire
Key statement: A combination vehicle tire sensor assembly and in-tire wheel balancer is adapted for residing inside a pneumatic tire mounted on a wheel rim of a motor vehicle. The combination includes a flexible mounting cable secured to the sensor assembly, and adapted for extending circumferentially within an annular space formed between the tire and wheel rim. A counterweight is secured to the mounting cable inside the pneumatic tire a spaced distance from the sensor assembly. A substantially hollow balancer belt resides inside the pneumatic tire adjacent the sensor assembly and counterweight, and defines a circumferentially- extending exterior groove designed for receiving and locating the mounting cable, and a circumferentially- extending interior cavity adapted for loosely containing a wheel-balancing medium.

Method of obtaining carbon containing material from recyclable tires and rubber products
U.S. patent: 11,084,937
Issued: August 10, 2021
Inventors: Alexander Teplitsky and Evgeniy Dzyura
Key statement: A method for obtaining carbon-containing material from recyclable tires and rubber products by mechanically crushing a raw material from recycled tires in a shredder, supplying a charge to a reactor at temperature, removing gaseous pyrolysis products from the reactor, followed by condensing liquid products, unloading solid residue from the reactor and cooling it, feeding the cooled residue into a crusher, coarsely crushing the solid residue, removing metal from the crushed solid residue in a magnetic separator.