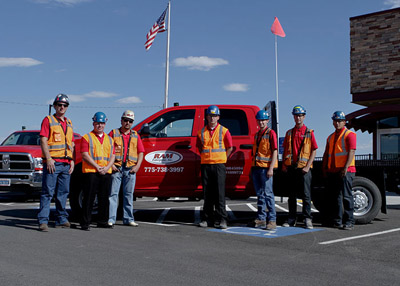 Elko, NV – RAM Enterprise, Inc. began its operation in 1991 by buying six loads of used conveyor belt, which were to be resold in the bulk material handling market. The company was founded by Richard A. Milroy, Jr., and he was soon joined by his brothe,r David Milroy, RAM’s first employee.

“We provide conveyer belt services all over world to many customers, primarily in mining,” said Tim Horn, RAM president.

Since that simple beginning, RAM Enterprise has grown to over 200 employees and is now a diversified company with service centers located throughout the western United States that serve the mining, aggregate, construction and power generation industries.

RAM’s in-house manufacturing and custom molding facility utilizes optimized rubber compounds from the most sophisticated compounders in the world to manufacture the finest, most durable and longest lasting rubber wear, impact and drive components available.