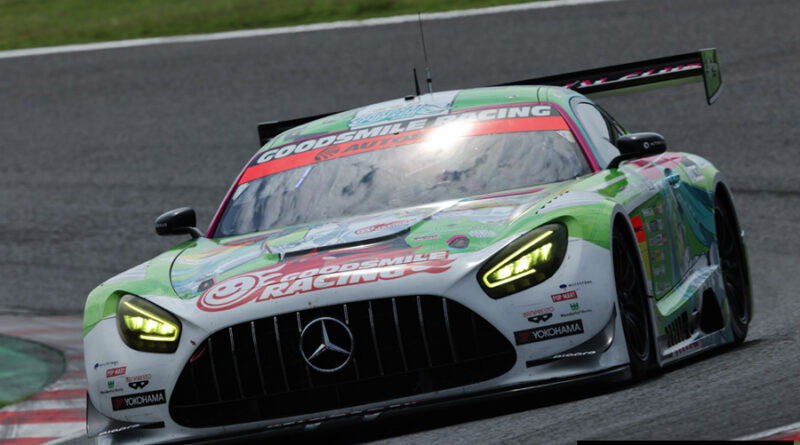 Tokyo, Japan- YOKOHAMA announced that a car fitted with its global flagship ADVAN brand tires finished first in the GT300 class in Round 5 of the 2022 AUTOBACS SUPER GT Series, Japan’s ultimate touring car racing series. Round 5 was held over the 27th – 28th August 2022- weekend at the Suzuka Circuit in Mie Prefecture.

The GT300 class winner was the GOODSMILE RACING & Team UKYO’s GOODSMILE Hatsune Miku AMG, driven by Nobuteru Taniguchi and Tatsuya Kataoka. The GOODSMILE Hatsune Miku AMG started the race in the fifth position but was in the lead after all the cars had finished their first pit stop, with Kataoka in the driver’s seat. Taniguchi took over after the second pit stop and drove skilfully over the final laps, taking the chequered-flag for the team’s first victory in five years since Round 1 of the 2017 series in April of that year. The win lifted the team into fourth place in this season’s team rankings – a good start to the second half of the 2022 series. Another car running on YOKOHAMA tyres, the apr GR86 GT (Manabu Orido/Hibiki Taira/Yuta Kamimura) finished 3rd, the team’s first podium finish in 2022.

Under YOKOHAMA’s three-year (2021–2023) medium-term management plan, Yokohama Transformation 2023 (YX2023), the consumer tire business aims to maximize the sales ratios of high-value-added YOKOHAMA tires, namely the global flagship ADVAN brand, the GEOLANDAR brand of tires for SUVs and pick-up trucks, and various winter tires. YX2023 also positions participation in motorsports activities as crucial to the company’s effort to develop new tire technologies that will further strengthen the ADVAN and GEOLANDAR brands. YOKOHAMA therefore is again participating in a wide variety of motorsports events in Japan and around the globe, from top-category to grassroots events.