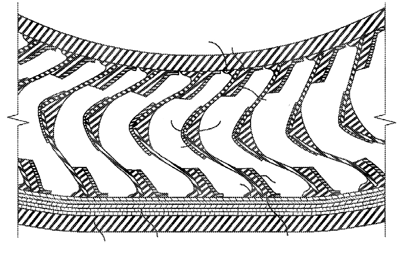 Rubber composition for tire tread and pneumatic tire
U.S. patent: 11,261,313
Issued: March 1, 2022
Inventor: Keisuke Iwakuni
Assigned: Toyo Tire
Key statement: A rubber composition for a tire tread according to an embodiment includes a
rubber component containing a natural rubber, a styrene-butadiene rubber and a polybutadiene
rubber; oil-absorbent polymer particles having a glass transition temperature of -70 to -20°C,
formed from a polymer whose molecular weight distribution is less than 3.0 and having an oil
absorption of 100 to 1,500 ml/100 g; an oil; and silica. The content of the oil-absorbent polymer
particles is 0.5 to 25 parts by mass per 100 parts by mass of the rubber component. As a result,
snow performance and wet performance can be improved.

Reducing crumb rubber modified bitumen odors
U.S. patent: 11,274,208
Issued: March 15, 2022
Inventors: Jacques Colange, Liting Xu and Hui Yan
Assigned: Shell Oil
Key statement: A method for reducing odors including the steps of admixing active agents and a
diluting agent to liquid crumb rubber modified bitumen, wherein the active agents comprise 20 to
60 wt.% of an aldehyde selected from alpha-hexyl cinnamaldehyde, 2-(4-tert.-butylbenzyl)
propionaldehyde, 2-benzylidenheptanal, or mixtures thereof and 10 to 40 wt.% of one or more
alcohols having a boiling point of at least 150° C, calculated on the total weight of active agents. A
crumb rubber modified bitumen composition is obtained by the method above. The use of a crumb
rubber modified bitumen composition is obtained by the method above in road surfacing and road
base materials, in insulating layers for buildings, in roofing materials and/ or in sealing sheeting.
Natural rubber skim block in asphalt compositions and non-asphalt solvent-based coatings
U.S. patent: 11,261,331
Issued: March 1, 2022
Inventors: Rodney G. Armstrong, III, Christopher D. Shepherd and Tom Marsh
Assigned: Corrie MacColl
Key statement: A skim block composition includes a carrier mixed with a skim block addition, the
skim block addition including from 0 to less than 100 wt.% synthetic polymer and from greater than
0 to 100% skim block. This provides productive use for the typical waste product skim block, which
is the neutralized and coagulated product of skim latex formed during the production of natural
rubber latex concentrate by centrifugation.

Rubber composition and method for making thereof
U.S. patent: 11,279,817
Issued: March 22, 2022
Inventors: Neil Riddle, Noriko Yagi and Jeremie G. Pichereau
Assigned: Kraton Polymers
Key statement: A rubber composition is disclosed. The composition comprises a blend based on 100 parts by weight (phr) of diene elastomers: 5 to 95 phr of a first diene elastomer, 5 to 50 phr of a hydrogenated styrenic block copolymer (HSBC), 50 to 200 phr of a filler, up to 25 phr of a plasticizer. The HSBC has a melt flow ratio of 1.0 to 50.0 measured according to ASTM D-1238 at 230°C and 2.16 kg load, a durometer A hardness of 40 to 80 measured according to ASTM D-2240, a DMA peak tan delta temperature of 0°C to 40°C at 1 Hz measured according to ASTM D-4065 and an orderdisorder transition temperature of 200°C to 300°C The composition does not comprise a resin, a plasticizer, or comprises a resin or a plasticizer in an amount of less than 20 phr.